A rare opportunity had become available for Gloucestershire Wildlife Trust to buy a particular piece of land – a missing link in a wildlife-rich valley that was not, at present, being actively managed for conservation. Over the previous 20 years, the site had fallen into decline and this was the last chance to restore the area, and to re-establish the rare wildlife that once inhabited it.

A generous Gift in Memory of a long-standing supporter and volunteer for The Trust had provided some of the capital required for the site purchase. But extra funds were needed from current members and supporters in order to secure the land and begin the restoration process as soon as possible.

These essential purchase and maintenance funds were needed within a window of just 14 working days from mat-drop to bid deadline. It was a race against time to raise the money. 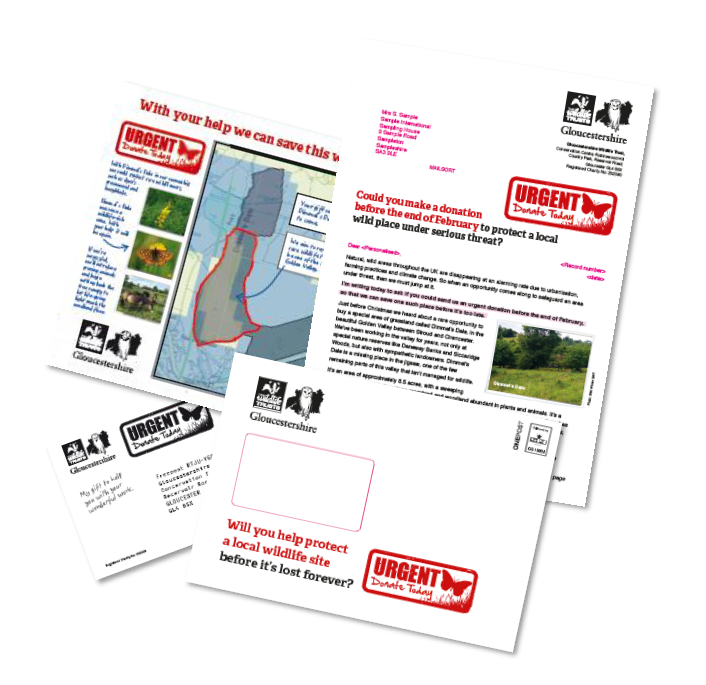 A simple and succinct approach that not only reflected the emergency nature of the appeal, but also emphasised the critical timing and need for funds within the given window of time.

The mail pack focused on a message about the rapidly declining areas of wild space in the UK due to urbanisation, poor farming practices and climate change. This led to the proposition of the land purchase: a rare opportunity to reverse the downward spiral and make a tangible and lasting change to the local environment.

The site was presented; its history, its unique flora and fauna, and the excellent opportunity for restoration; punctuated with a stark reminder of just how much limestone grassland has been lost locally since the 1930s.

Members and supporters of the Trust are already knowledgeable about the natural environment and advocates of conservation. Therefore an intelligent and positive approach was used to inform and inspire those (who already for the most part, give a regular membership ‘gift’) to step up and join with The Trust in making a difference.

Many supporters are also local. So we created an emotional link to the site, reassuring supporters by laying out the plan and reaffirming how critical a time this was… They must act now, standing together to safeguard the space and the rare species along with it.

A simple donation form was backed by a map of the site, with a brief synopsis of some of the rare, grassland species under threat. And throughout, reminders of the time frame, alongside the ‘Urgent Appeal’ icon, were used to reiterate the extreme urgency of the task.

The appeal was a resounding success. The wonderful members and donors of The Gloucestershire Wildlife Trust engaged instantly. Within 10 days of the pack being mailed, the fundraising target had been met and exceeded, well ahead of the critical closing date for the land purchase.