Create a suite of DM appeal packs – aimed at both raising funds from the Sanctuary’s active donor base and for acquiring new donors through cold direct mail and door drop channels over the summer period.

The Sanctuary regularly asks active donors to support their ongoing work through appeals, but in the summer of 2018, the overcrowding issues facing ponies on Dartmoor led to a special requirement to create an appeal solution that would raise both awareness and much-needed funds to bring more of these suffering hill ponies to the safety of the Mare and Foal Sanctuary. 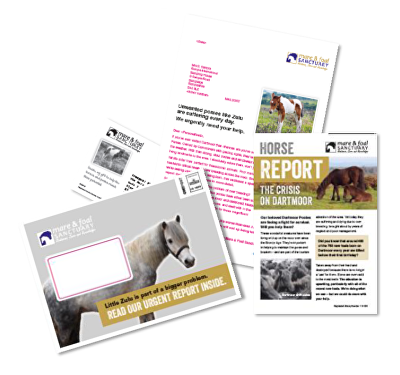 The crisis on Dartmoor – an urgent report It was quickly identified that the most distressing and resonating fact of the overcrowding issue was that ponies were being taken from the moor – often as young animals and either being sold to the meat-trade or simply destroyed. This was not widely known by the public, or that the Sanctuary firmly believes there is a better solution to the overbreeding problem; and a kinder use for these ‘excess’ animals.

Using a young Dartmoor hill pony named Zulu as a case in point, two packs were developed – for both the active and cold audiences that led with a hard-hitting strapline, emphasising the seriousness and urgency of the situation. The packs both introduced with a letter to outline the dire situation facing ponies on the moor and the shocking ‘solution’ of eating these creatures as an answer to the problem. Both packs contained an urgent report reaffirming the stark truths of the issue, whereupon Zulu was introduced to demonstrate the Sanctuary’s own solution of rescue, rehabilitation and rehoming for those current ‘excess’ ponies, as well and their own remedy for future population control; including gelding clinics and vasectomising to control birth rates.

The cold pack contained a simple £3 coin response making it easy for the audience to respond and engage with the Sanctuary for the first time.

Clearly a subject that resonated with the intended audience – a response rate 7% higher than predicted was achieved on the warm segments against the business case, and an exemplary income that more than doubled from forecasts. The cold coin packs performed equally well for both DM and DD channels with a response rate far higher than expected and an excellent positive ROI.